Being able to be in good health is a blessing from God, but not all of us are fortunate enough to have properly functioning bodies. Lucas is a 22-year-old who was born with a rare lymphangiomatous tumor on his face. By the time Lucas was 10 years old, he had undergone 24 surgeries, but none of them were successful in treating or removing the painful tumor. And the tumor wasn’t just an eyesore, it caused blurred vision, a burst eardrum, and extreme pain fro Lucas. The desperate young man needed help, so he appeared on the hit talk show ‘The Doctors.’ Lucas was then put under the care of Dr. Gregory Levitin, who is the Director of Vascular Birthmarks and Malformations at Mount Sinai in New York City.

Recently, Dr. Gregory performed the life-changing surgery on Lucas and was finally able to rid him of the tumor that had burdened this young man since the day he was born! Now, Lucas no longer has to live a life in constant pain. “It’s a just a whole different world,” Lucas said. “Not having that weight on you is completely different… It’s something that I never thought would happen, and it happened. It’s changed pretty much everything for the better.” 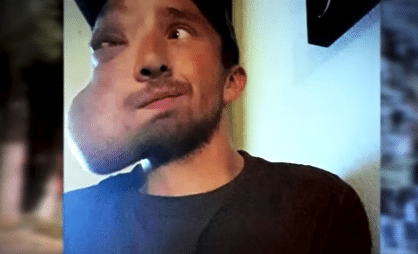 Dr. Gregory said that for many people who have tumors like the one Lucas had, the mass can become like a drain on the body. So, when it is removed, the patients will often have increased energy, better sleep, and a generally improved quality of life. Before he had the tumor removed, Lucas was taking 100 ibuprofen each week. Today, he doesn’t have to take any! Watch the video below to see more of Lucas’ story and learn more about his life-changing surgery:

Share this good news with your friends and pray for Lucas as he gets a new chance at life!