Terry Selwood, an Australian fisherman caught a fish that was much bigger than his usual catch in the most unexpected way. A great white shark, about 8.8-foot long, jumped into his boat while Terry was fishing near Evans Head in New South Wales, about 450 miles away from Sydney.

As a result of the great white’s dramatic entrance, Terry Selwood was knocked off his feet. The 73-year old Australian fisherman was left badly bruised and his right arm was bleeding when the airborne great white shark’s pectoral fin struck him as it landed on his boat. 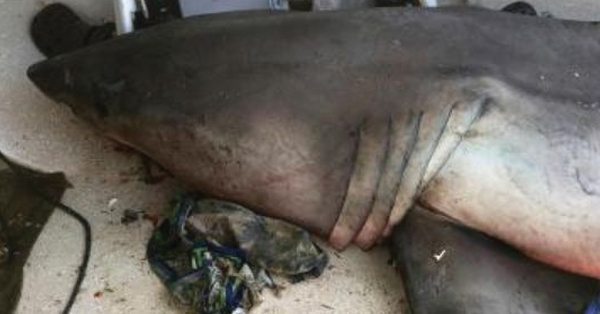 However, Terry Selwood immediately got back on his feet to avoid getting squished by the shark that launched itself on his boat. He held on the bimini or the sun shelter’s metal frame to ensure he was steady enough to handle the ongoing situation.

Terry Selwood had almost no time to react to the leaping shark as it was all a blur. He could only feel the great white shark’s pectoral fin cutting his forearm.

Terry Selwood said, “I was losing a fair amount of blood; I was stunned.” According to Australian Broadcasting Corp, he said, “I couldn’t register what happened, and then I thought ‘oh my God, I’ve got to get out of here.”

According to Terry Selwood, “Flash Gordan wouldn’t have caught me.” He is referring to the comic book hero from the 1930s, who goes around saving the universe.

Terry Selwood told Australian Broadcasting Corp “There I was on all fours, and he’s looking at me, and I’m looking at him, and then he started to do the dance around and shake, and I couldn’t get out quick enough onto the gunnel.” 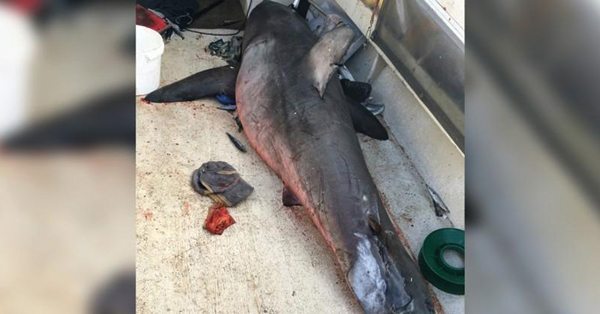 To get help, Selwood used the hand-held radio on his boat to call the coast guard for Evans Head and continued to stay on the gunnel till the arrival of a rescue boat. Bill Bates, the coast guard who came to Selwood’s rescue completely misread the situation. Bill Bates said, “Often a fisherman will bring a small shark on board — maybe 2 or 3 feet — and they’re still ferocious. That’s what I was expecting, but I was totally wrong.”

When Bill Bates came to rescue Terry Selwood, he saw the Great white shark thrashing about and taking up the entire space on the deck. Bill Bates said, “It was a [16.4 foot long] boat so you can imagine there was no more room for people when the shark was in there.” As a precautionary measure, they got Terry Selwood out of his boat and left the shark alone.

Terry Selwood was taken to the nearby local hospital immediately as his arm was swollen. Lady Luck was on Terry’s side as the paramedics cleared him of a fracture. 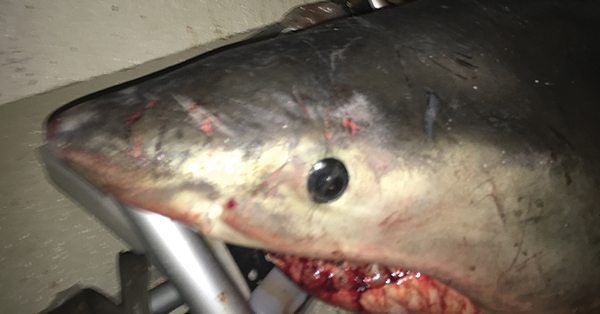 Even though the fisherman had a traumatic experience, he told Australian Broadcasting Corp that it won’t stop him from fishing. 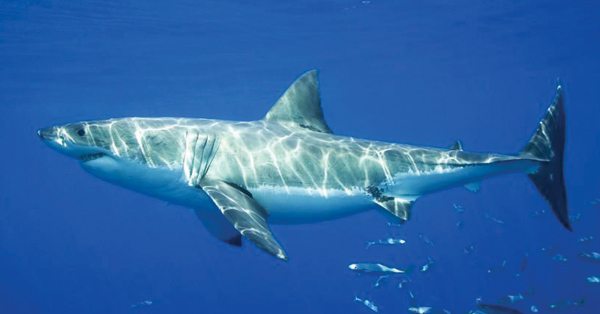 -Great white sharks get their name from the color of their body. Their underbelly is white in color while the rest of the body is gray. Also, sharks are extremely good swimmers as they have powerful tails and their body is streamlined. As a result of this, they can propel themselves through water at an astonishing 60km per hour!

-Any fish or human being that unfortunately finds itself in the mouth of a great white is in for a nasty surprise! The mouth of a great white shark has a set of 300 extremely sharp and triangular teeth. That’s not all, the seven-row arrangement of these teeth is what makes them even scarier! If you believe nothing can scare you, take a closer look at their teeth.

-Although we keep reading about sharks attacking humans, surprisingly, humans aren’t on the menu for Great white sharks. Doesn’t that sound like a major relief as you don’t have to think too much about going for a swim in the sea? Even though there are 5 – 10 attacks on a yearly basis, researchers believe that Great white sharks don’t prey on humans. They attack humans because they are curious about what we taste like and once they get an idea, they swim off into the ocean instead of finishing their meal.

-Well, if Great white sharks don’t eat humans then what do they actually eat? When Great white sharks are young, they feed on fish that are much smaller than them such as rays. As they get bigger and older, they start feasting on sea mammals that unfortunately cross their paths such as small whales, seals, and sea lions.

-What makes Great whites even scarier is their insane ability to smell out their prey! In fact, if there is a colony of seals swimming two miles away, Great whites can detect them without breaking a sweat. Here is another thing about their smell, if there is a single drop of blood in 100 liters of sea water, a great white will be able to pick it out.

-Great white sharks usually give birth to two to ten baby whites called pups. However, instead of taking care of her little ones, she may try to eat them if she feels like it. Survival of the fittest starts immediately for newborn pups as they have to swim away from their mother!

-Great white sharks are extremely cunning as they believe in the element of surprise. They position themselves below their poor victims and swim up with great speed to catch them. In no time, they will burst out of the ocean and fall back with their prey in their mouth. When you talk about killing with style, great white sharks take the cake!

-As Great white sharks are on top of the food chain, the majority of the sea creatures don’t try to take them down! However, their numbers are dwindling due to human activity. Overfishing and illegal hunting of these magnificent beasts have made them an endangered species.