We have to work in order to support ourselves. Nothing comes for free in this world. As the Bible says in Ephesians 6:7-8, “Serve wholeheartedly, as if you were serving the Lord, not men, because you know that the Lord will reward everyone for whatever good he does, whether he is slave or free.” In most cases, the tips received by restaurant staff that draws public attention when posted on social media are rather generous. However, we sometimes hear about the occasional waiter or waitress who didn’t receive any tip at all. An Imgur user who goes by the name of Seminole posted on the 11th of January about his recent experience as a waiter. He ended up receiving a reasonable tip by the end of the story. However, the story began quite differently.

There was a lesson learned by the waiter and the table of teenagers that he served and that’s what gained the most online attention. It all began when a group of four teens sat at one of the tables that the waiter was serving. The group went to the restaurant for their homecoming dinner and it was also their very first experience dining alone without any adults around. At the end of their meal, the teens wanted to split the check and pay with their own cash. The waiter handled all the division and the cash payments without any complaints from his part. After all this, all the teenagers left him was $3.28 as a tip. The waiter had likely received worse tips and so he moved on. The teens, on the other hand, weren’t so quick to move on. They owned up to their lousy tip through a letter and a better tip to the waiter. 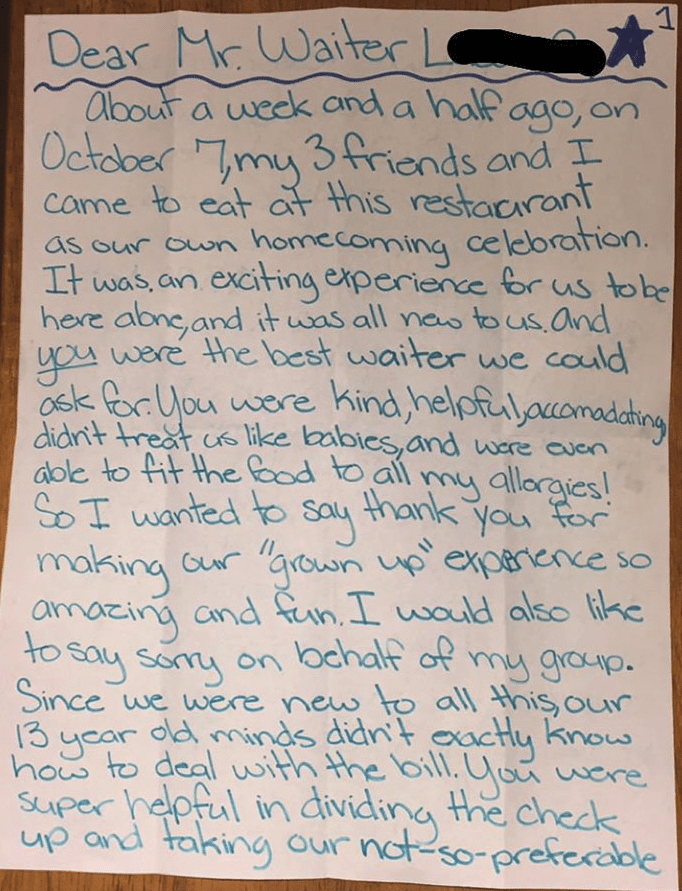 The waiter found the letter the teens wrote along with a little over $18 at the front desk of the restaurant. They dropped off this letter a week after their homecoming dinner. It read, “You were kind, helpful, accommodating, didn’t treat us like babies, and were even able to fit the food to all my allergies! So I wanted to say thank you for making our “grown-up” experience so amazing and fun.” The letter wasn’t just another thank you note. The teens also wanted to say sorry for their initial tip. The teen who wrote the note admitted that they weren’t sure how much to give as a tip so they dug in their pockets for change and all they could come up with was $3.28. Someone must have surely informed the teenagers about proper tipping after the homecoming dance. The letter went on to explain that, “Not aware of how small this (tip) really was, we left, clueless of what we had left you for all your hard work. Later we realized our mistake and felt HORRIBLE. We knew we had to make it right. So in this envelope, you will find the correct 18% tip + extra for simply being amazing.” 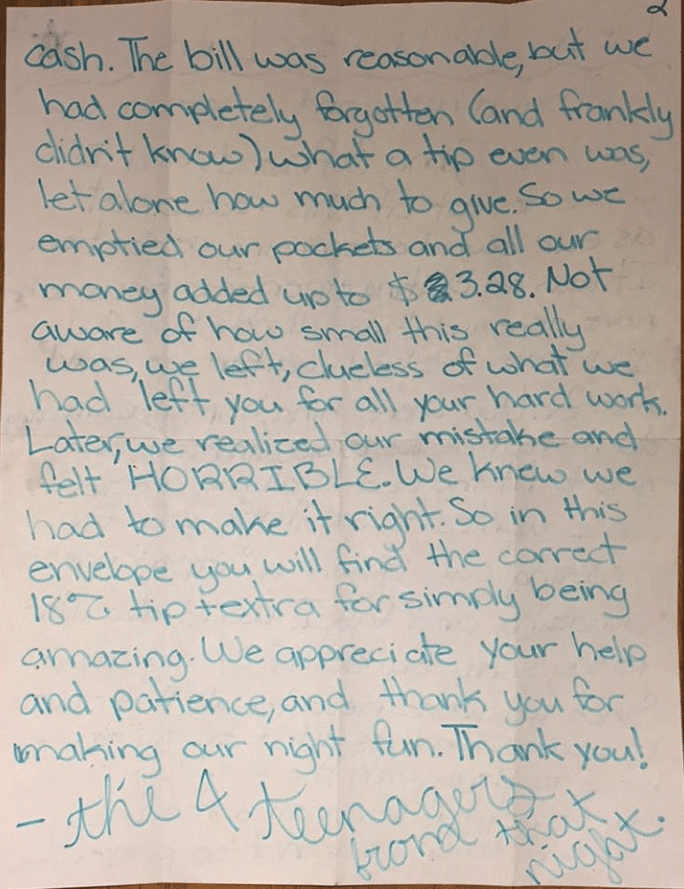 Although they felt horrible, it inspired them to make it up to the waiter with a proper tip and this note of apology and gratitude. The waiter who received the letter and the tip wrote, “Nothing more frustrating than when I get little to nothing for a tip and the customer is smiling and thanking me profusely as they exit. These kids came back another day and left this for me at the front desk, with $18 and some change,” he continued. “I’ve been serving a long time, and nothing like this has ever happened to me, or anyone.” The waiter took to Imgur to share his experience and wrote that he appreciated the kindness and effort that was put in by the teens and that the letter restored his faith in people. 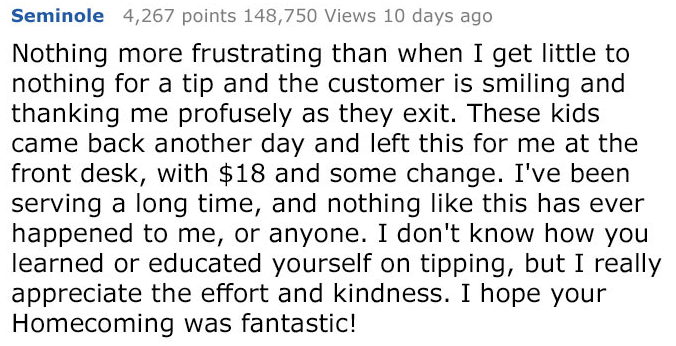 Share this story to help inspire more acts of kindness!