God wants us to look out for each other and help those in need. People like police officers and firefighters do so much to protect us and keep us safe, we should be more appreciative of the sacrifices they make! Rick Rickerson is a retired fireman who was in the right place at the right time. He was able to save a life, but, according to a state trooper, he was also very much in the wrong place.

The whole thing started as Rick was driving down a desolate stretch of highway in Atlanta, Georgia. All the sudden, Rick watched in horror as a car driving near him flipped over. The driver of the wrecked car, Rebecca Buchanan, became trapped under the vehicle, so Rick rushed to her aid. As a retired firefighter, Rick knew what to do and he was able to pry Rebecca out of her car. But things weren’t looking so good and, according to Rick, Rebecca wasn’t breathing after he got her out of the car. Luckily, Rick was able to dial 911 in time and help arrived that saved her life. 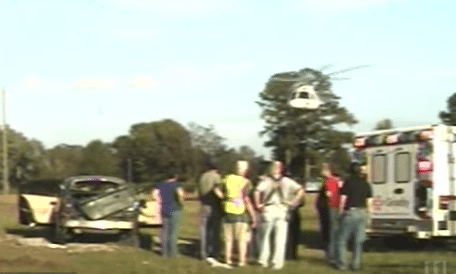 But, there was another problem. When Rick saw the accident, he jumped out of his vehicle and rushed to Rebecca’s aid. He left his truck in the middle of the street with the keys still in the ignition. something that got him in big trouble. So, when first responders arrived at the scene, Georgia State Patrol trooper Sgt. Rodney Jeter asked Rick to move his truck. However, Rick refused and said that he wouldn’t leave Rebecca’s side. He was worried he would have to give her mouth-to-mouth and he didn’t want to run off to move his car and risk losing her.

But, the sergeant wasn’t going to tolerate Rick’s answer. Rick was arrested for “obstruction.” The poor man spent several hours behind bars, but he was eventually released and able to meet Rebecca, who miraculously survived the crash! So, was this arrest fair? Watch the video below to learn more about the story:

Share this story and see if they think Rick’s arrest was fair.