There is an astonishing number of excuses that have been created to cover for a child being late to school. The number of reasons a parent gives to explain their child’s tardiness to their teachers is something that should be studied! Back in the olden days, things were relatively easier. History.com notes that it was a fairly common practice to skip school in order to help out with agricultural chores or help an ailing family member back in simpler times. Education could hardly take precedence over agricultural responsibilities.

But, jump over to the 21st century and things are not as simple as they were before. Perhaps this is why the simple, straightforward answer by this mother explaining why her daughter was late for class is going viral on Reddit. This honest response has set itself apart from the typical mix of excuses and explanations. This Reddit user is a mother who did not bother with superficial details and excuses while signing the Tardy Sheet at her daughter’s school. Her heroic, handwritten response has won the hearts of millions online. She condensed everything down to two simple words: “Bad Parenting” 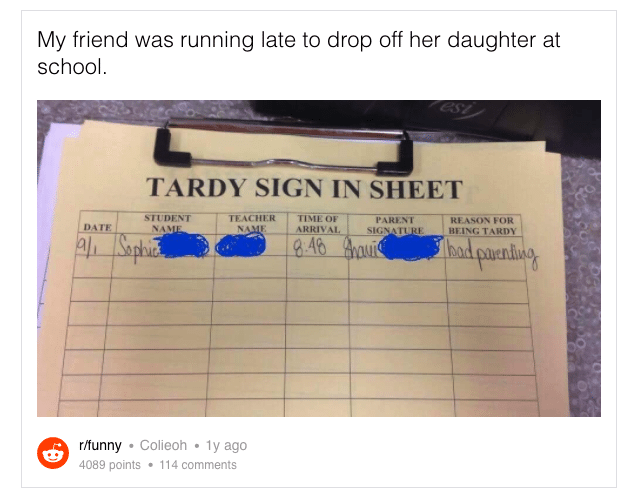 Does this sound a bit too edgy to you? Perhaps it is, but for the best. At least it did break the monotony of usual late-to-the-class excuses and offers us a refreshing look into the lives of school children and their parents. Also, I am sure that the daughter will learn an important lesson from her mother about being straightforward and sincere.

Share this story with your friends who are moms and see what they think about this excuse.