God is creative and he has blessed us with part of that creativity as well! People who are gifted by God with artistic abilities can create some truly beautiful things! One creative teen from Columbus, Ohio is using his talents and using them to turn his life around!

Jimelle Levon once lives in a homeless shelter with his mother. But, even though he was faced with plenty of struggles, Jimelle never gave up. Instead, he let these negative circumstances light a passion inside of him. Even though he was young at the time, Jimelle knew that the only way to better his life was through hard work. So, by the time Jimelle was in the sixth grade, he was already a young entrepreneur! 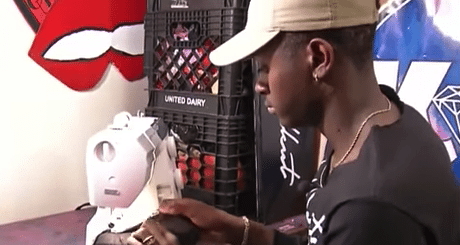 “Me and my mother lived in a shelter before when I was in fifth grade,” Jimelle said. “From there on, once I hit sixth grade, I was always a hard worker, either shoveling the snow or anything to gain money because I didn’t want to be in the predicament anymore.” Now, Jimelle is 18 years old and has a bright future ahead. He has been making prom dresses by hand and selling them to girls at his high school. Being a high school senior, he even made his prom date’s dress! Jimelle began learning to sew when he was only 14 years old, and since then he has converted his tiny bedroom into his “Sewing Lab.”

Each year, the hard-working teen sells three or four custom-made dresses during prom season. He sells these spectacular and elaborate gowns for anywhere from $300 to $450. Each dress he makes is handcrafted and made especially for his customer. He has made sparkling mermaid dresses and simple monotone gowns, but every dress is drop-dead gorgeous and one of a kind. Today, the teen who once worked two jobs was able to quit both and work on his own business full-time. Next fall, he’ll be attending Clark Atlanta University to study business and fashion. We are wishing Jimelle good luck and can’t wait to see what he creates in the future!

Share this story to inspire your friends with Jimelle’s hard work and beautiful dresses!