When one of our loved ones goes missing, we are filled with a kind of burning despair. We panic and always assume the worst. But under such circumstances, we must have faith in God and do all that we can to find the person. Pet dogs are like family members, they connect and bond with us, forming actual relationships. So even when a pet goes missing, we are filled with the same panic. Maine resident Albert Silver found himself under such a situation when his family dog Sophie went missing. She was last seen on the 4th of January, and this prompted Albert to create a Facebook alert the very next day. Albert wrote in the post: “We are missing our 13-year old yellow lab named Sophie from Cushman Road in Bryant Pond. She went out with all of us last night just before [5 p.m.] while we were plowing and shoveling, and she wandered off and hasn’t come back.”

Over the next few days search parties, friends, and family went out and looked for Sophie. The local animal control group also joined them in their search. They searched for her in cars, snowmobiles, and on foot, but she was nowhere to be found. Still, he had faith that they would find her really soon. His post, which accumulated more than 2,400 shares, was continuously updated with progress. They had a few leads regarding her whereabouts when they started searching for her. “She followed us next door to her [aunt’s] house when we plowed there. Afterward, she went to a neighbor’s house that she visits often and then he sent her home. She was last seen leaving his house.” he commented. They were losing hope day by day, but the following Tuesday morning something miraculous happened.

Someone by the name of Richard Austin found Sophie buried under snow. Moreover, she was alive and kicking. He spotted the dog by her head peeking out of the snow. This was in an area Silver and his group had already searched. He plowed the dog out using his tractor and brought her back to her family. They soon took Sophie to the vet to check if she was really okay. In spite of the 5-day rigorous outdoors she was healthy. She had dropped 5 pounds but that’s nothing a few days of proper food won’t cure. All her X-rays and blood-work came back normal. Sophie was safe and sound. 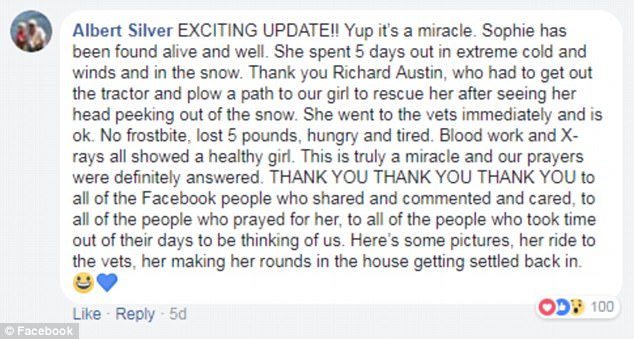 Now that his family was whole again, Silver thanked everyone on Facebook who helped him during these last few days. Without giving up he put all his energy into finding Sophie. He put his faith in the almighty and had his prayers answered. There’s an old saying that goes ‘God helps those who help themselves,’ and we can see it ringing true in Silver’s case. This story might make you want to cherish the time God has given us with each other.

Share this story with your friends who love animals to let them know about this sweet dog’s return!