Christian movies have a way of connecting us with God while telling amazing, powerful stories. An upcoming movie called “I Can Only Imagine” is about MercyMe’s hit song and it is set to hit theaters on March 16. The movie has Dennis Quaid and J. Michael Finley playing the main characters. The film tells a beautiful “behind the music” real-life story that is sure to leave audiences everywhere and filled with hope.

It is indeed a very emotional movie, but even Dennis Quaid didn’t expect that his character in the movie would impact his personal life in such a profound way. In the film, Quaid plays the role of an abusive father who is named Arthur. Arthur, in the end, ultimately finds the precious gift of grace.

This character has really touched the actor’s life, and walking in Arthur’s shoes throughout his redemption journey has stirred up a desire in Quaid to finish a song that he began composing over 25 years ago. The song was written for his mother and entitled “On My Way to Heaven.”

“I grew up in a Baptist church, went to Sunday school, and then I got baptized when I was nine and made the decision the same day as my brother,” Quaid said. “My brother and I, Randy, were both baptized on the same day.” After that, Quaid said that he went through a time of rediscovering of who God really was while he traveled the world in his late 20s. In the end, his search led him to one conclusion: Jesus. “The question I had as I went around the world was ‘Who is God?’,” Quaid said. “I became a seeker really… I read the Bible cover to cover. For me, it’s Jesus… it’s the red words of Jesus. How simple it is. There really is redemption and that was the inspiration.” 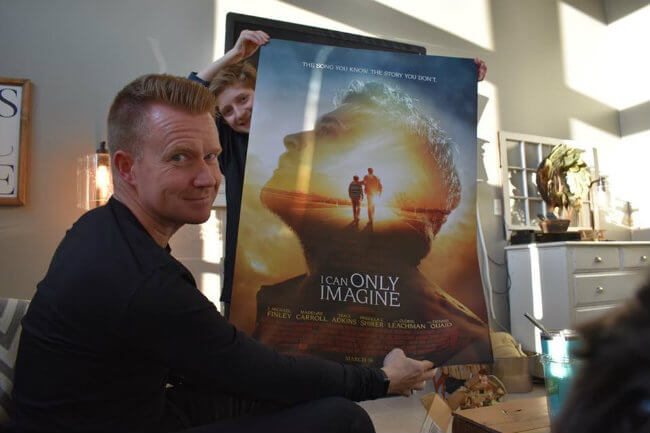 Now, the song that Quaid had started to write went unfinished for 25 years because he could never think of a bridge to complete it. But while filming “I Can Only Imagine,” he said that the missing piece finally came to him in a wave of inspiration while he was playing the role of Arthur.  “What moved me about finishing it really was my character of Arthur and how he found grace… That’s the beautiful thing about the good news that Jesus was talking about,” Quaid said.

Listen to “On My Way To Heaven” in the video clip below:

Share this beautiful story about Dennis Quaid to inspire others with his rediscovered faith in God!