Our bodies are God’s temple, that’s why taking care of our health is so important! We all must eat and exercise in moderation in order to maintain a healthy weight, but it’s a lot easier said than done. Jacob Miller was always big, even when he was just a baby. His parents weren’t concerned at first and figured it was just baby fat that would eventually go away, but Jacob continued to grow and grow. By the time Jacob was just one-year-old he weighed fifty-two pounds and his doctors were very concerned about his future health.

As Jacob grew up and became a teenager, he was still a really big boy. In fact, when Jacob was fifteen he weighed a whopping 715 pounds and was 6’5″ tall. At this point, poor Jacob was in extreme pain both mentally and physically. The young teen was already suffering from diabetes, heart prob, ems and liver disease. It was at this point that Jacob’s parents knew their son needed a drastic change, so they set out to find a cure. 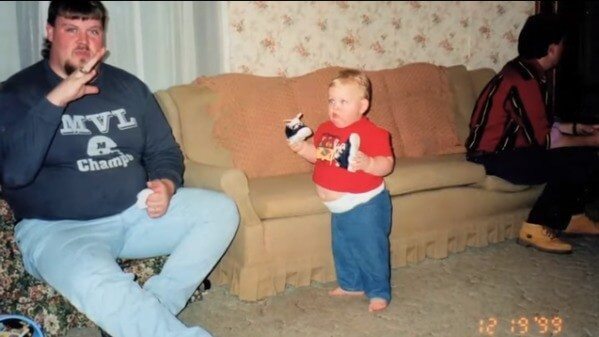 And, they did have some luck! Jacob found the help he so desperately needed at the Cincinnati Children’s Hospital Medical Center. Jacob’s family firmly believed that there was an underlying problem that was causing their son’s immense weight gain. And, as a last resort, the doctors at Cincinnati Children’s Hospital Medical Center decided that gastric bypass surgery was their only option to buy more time so that they could later do more research on Jacob’s condition.

Jacob’s pediatric surgeon, Dr. Tom Inge, said this to Jacob and his family: “Bodies aren’t built to hold this much weight. Surgery is the best option to give Jacob a chance at turning his life around.”  Jacob followed a restrictive diet in the weeks that lead up to surgery. After sticking to this diet, he managed to lose 77 pounds. Both Jacob and his parents were realistic about the role that surgery would have in Jacob’s journey to lose weight and get healthy. All three of them recognized that Jacob would have to put in a lot of hard work to finally achieve a healthy weight.

His mother said, “I don’t think it’s the fix-all, cure-all, but at least it’s going to slow him down enough to maybe give us some time to do some more research to figure out what is causing his growth.” Jacob’s father also admitted that the surgery scared him, but ultimately he knew that this was the best plan of action for his son, saying: “If this is the extreme that we have to go to, then that’s what we’ll do, because whatever he needs done is what’s best for him.”

Now, six months after the surgery, Jacob had gone from a size 10X shirt to a size 5X, and from 5X pants to 3X pants. Jacob said, “It’s hard, but not as hard as it was before surgery. Before I couldn’t do anything, I’d walk for five minutes and I’d have to sit down. Now I can walk for a half hour and not sit down.” Learn more about Jacob’s story and see his transformation in the video below:

Share this story with your friends to inspire them with Jacob’s transformation!