We have all heard of miracles; many of us have been benevolently blessed by them during certain times in our lives too. But there are astonishing surprises too that are hidden in our course of life. One such person to be spookily surprised is Priscilla Bailey. A resident of Massachusetts, Priscilla has a tendency to be thrifty. That’s why she smartly opted to buy some Christmas ornaments second hand at a sale. Sure, most of us are driven to splurge on shopping for items (mostly unwanted if you’re honest with yourself!), thanks to the heavy commercial advertising we are surrounded by every day. But there are several people who opt to do some smart shopping when possible. And who knows what mysterious past some items come with – everything has a story to tell! The ornament that Priscilla bought too had an eerie story of its own. 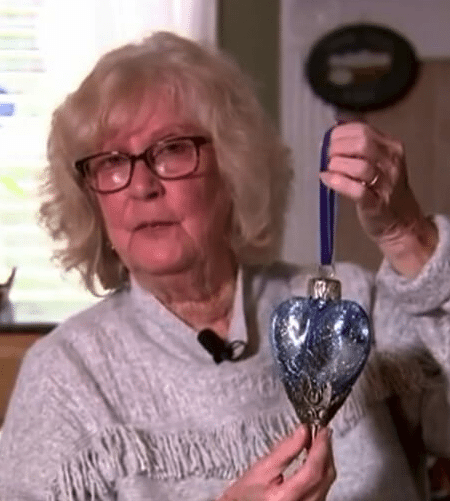 After buying the blue heart-shaped ornaments from a thrift store, Priscilla decided to hang it up in her kitchen. She was fascinated by the way the ornament caught and reflected light. It sparkled as it moved too. When asked to tell us about what she sees, Priscilla said the following,“Right up here on the top, right across the top, it looks like angels or Vikings; they look like little angels, and there’s all this work down here. It’s really beautiful.” And from the photo publicized, we surely can agree with her! The ornament is a pretty heart-shaped one in an unusual shade of blue. Strung up by a blue cord, it has pretty beads dangling from the bottom that adds to its charm.

Bailey was pleased with her purchase and must have made it a habit to glance at it often. After observing it over a period of time, she discovered the ornament was not hollow. There was, in fact, something within it. Curiosity lit in her. She made it a point to take down the ornament and examine it minutely. She had seen something move within it when held to the light of a flashlight. She explains, “It’s small. The two spots in it are small, the size of a golf ball.” Upon deeper investigation without opening the ornament, she realized that it was filled with a powdery substance. She has concluded that she most likely has an urn for an ornament, complete with ashes within it! Together with her daughter, Kat Bartlett, Bailey has made it her mission to find out the ornament’s rightful owner. She has decided not to try and open the ornament for fear of spilling its contents. Initially, she was spooked. But now, Bailey is no longer spooked and simply hopes that with sufficient attention drawn to her story, the owner of the urn will contact her to claim it.

Share this story with your friends who love shopping second hand to see what they think about this find!