Faith has a strange and wonderful way of turning our lives around. Sometimes the phrase, “God works in mysterious ways” is so evident that there is absolutely no denying it. When God shows up in our lives in the form of a kind stranger, a passage in a book, or even in a text message, we should acknowledge His presence and give him thanks. Sydney Uselton was out dress shopping one day when her life got a whole lot more interesting. Sydney took a picture of herself trying on a dress and sent it to her friend for her opinion. The only problem was that the message didn’t go to Sydney’s friend as intended, but to a wrong number accidentally.

Syd accidentally sent pics of her dress to the wrong number and this was their response pic.twitter.com/SWmcqSFiqh

The recipient of the message was a father of six, Tony Hill. The kind man decided to let Sydney know about her mistake in the nicest way possible. He replied telling her that he had received the text that he knew was intended for someone else and he would have asked his wife her opinion but she wasn’t home. Instead, Tony took a picture of five of his six children with their thumbs up and sent it to Sydney saying that his kids thought she looked great and to buy the dress.
Sydney was so touched that she shared the story with her friend who posted it on Twitter. The post went viral and as the story unfolded, it was found that Tony’s sixth child Kaizler was in the hospital for chemotherapy. Kaizler has leukemia and he and his mom were at the hospital for his treatment. The viral post has helped to raise funds for Kanzler’s treatment and it all started with one wrong number text. 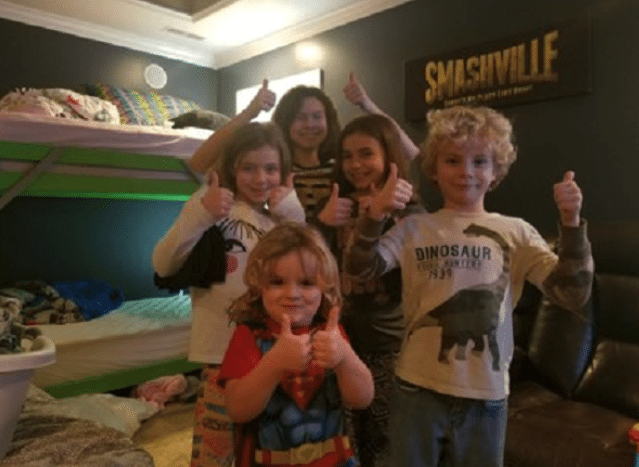 Share this story and pray for the Hill family!