God is creative and he has blessed us with creative abilities as well! DIY projects are fun and a great way for us to use our creativity to save money. PVC pipe may seem like a simple, ugly material, but it can actually be transformed and used for something pretty amazing! Blogger Shelley Detton recently came up with a great use for OVC pipe and wrote about the project on her blog, 7 Layer Studio. She said that she came to the realization that PVC pipes could do the same job as expensive curtain rods, so she decided to try an experiment. 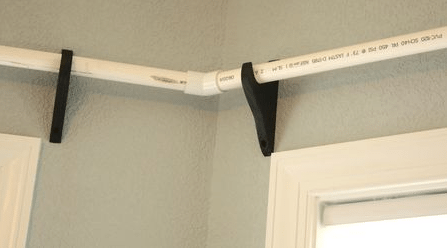 “I didn’t want to spend a fortune on these walls, and I wanted the drapes to completely cover the space between the windows, so I knew I could get away with the 45 angle PVC couplers and the super cheap curtain rod brackets (you can buy them in unfinished pairs at Lowes for a couple bucks each set),” Detton wrote on her blog. “So I painted the pipes black with spray paint that’s especially designed for plastic, and I only had to buy 2 unfinished finials for either end of the curtain rods (which I also painted black, obviously).” 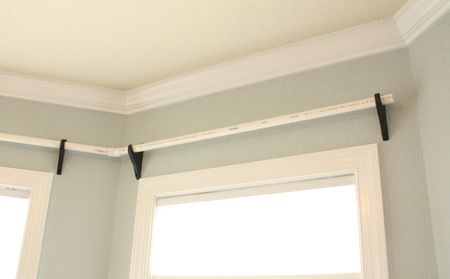 Detton claims that the entire setup, including the PVC pipes, brackets, finials and spray paint only cost her $20. “To make the finials (which come with a screw inserted in them already) attach to the ends of the PVC, I could have glued wooden dowels inside the ends and then screwed into that, but instead I sprayed some of that expandable caulk sealant stuff (the foamy kind that expands and then hardens) into the open ends of the PVC, then taped the finials in place on the end before the foam had a chance to expand/escape/ooze out the end,” Detton wrote. “Once it hardened (about 30 minutes) they were firmly secured in place and I didn’t have to go try and find a dowel that would fit just right inside the pipe.” 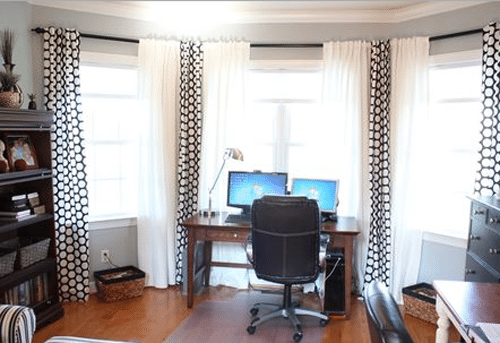 Now, if you look at the final product, I bet you would have never thought that it was PVC pipe holding up those curtains instead of expensive rods!

Share this story with your crafty friends and see if they want to attempt this project with you!