When a mother finds out they are expecting a baby, it is normally a very exciting time. However, sometimes this great news can become very scary when medical issues are uncovered and you find out that the mother or the baby is in great danger. A lot of prayers are said when having a baby. Prayers for them to be healthy and for everything to goes as planned. 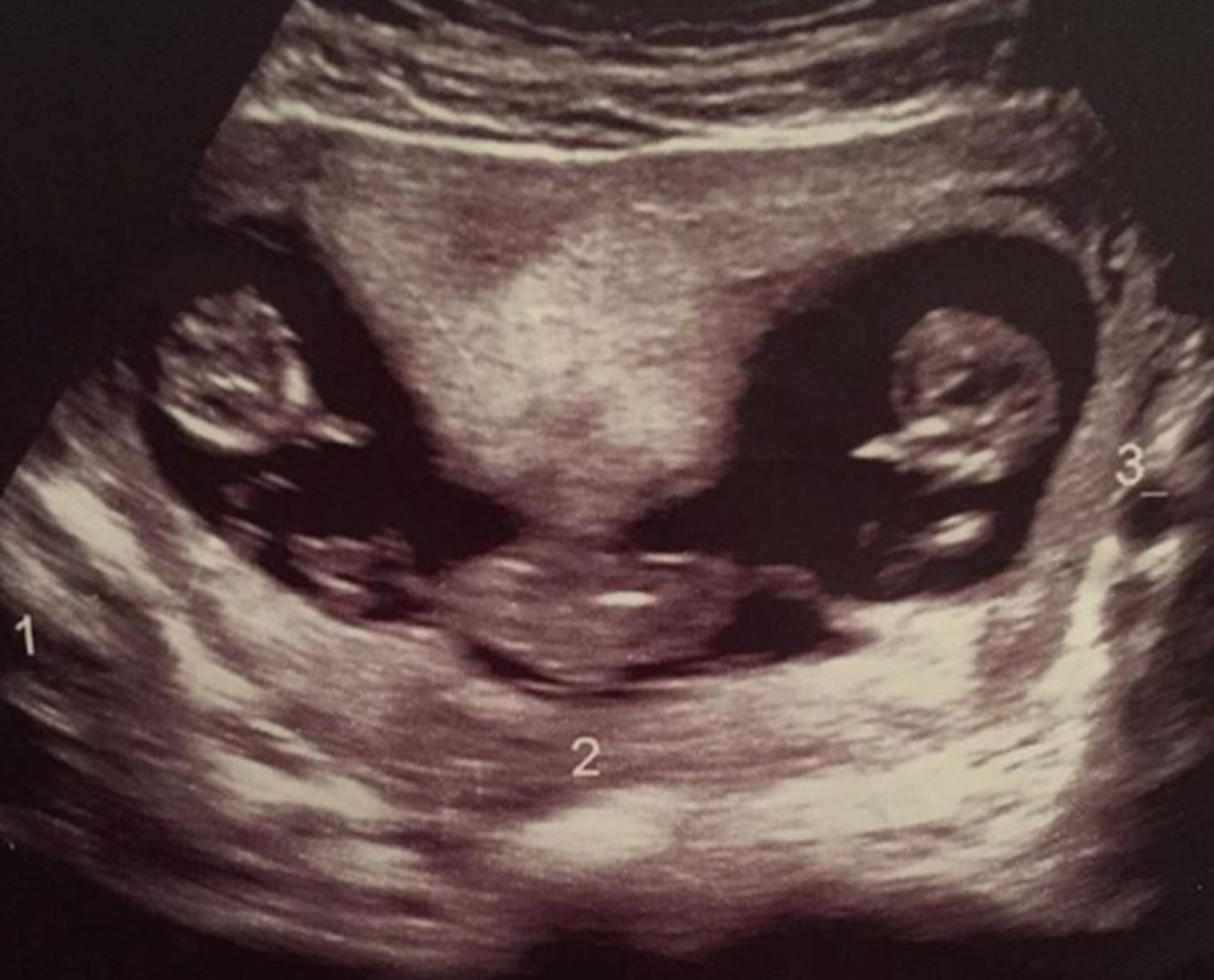 A woman from England named Becki-Jo is a mother to an adorable little girl named Indiana. Becki-Jo felt nauseous and uncomfortable one day and, since she had already gone through one pregnancy, she suspected that she might be expecting again. Little did she know that her body was preparing for something BIG. “I had been being very sick and had a really bad headache so I booked an early scan and that was when I found out I was expecting triplets,” Becki-Jo said. 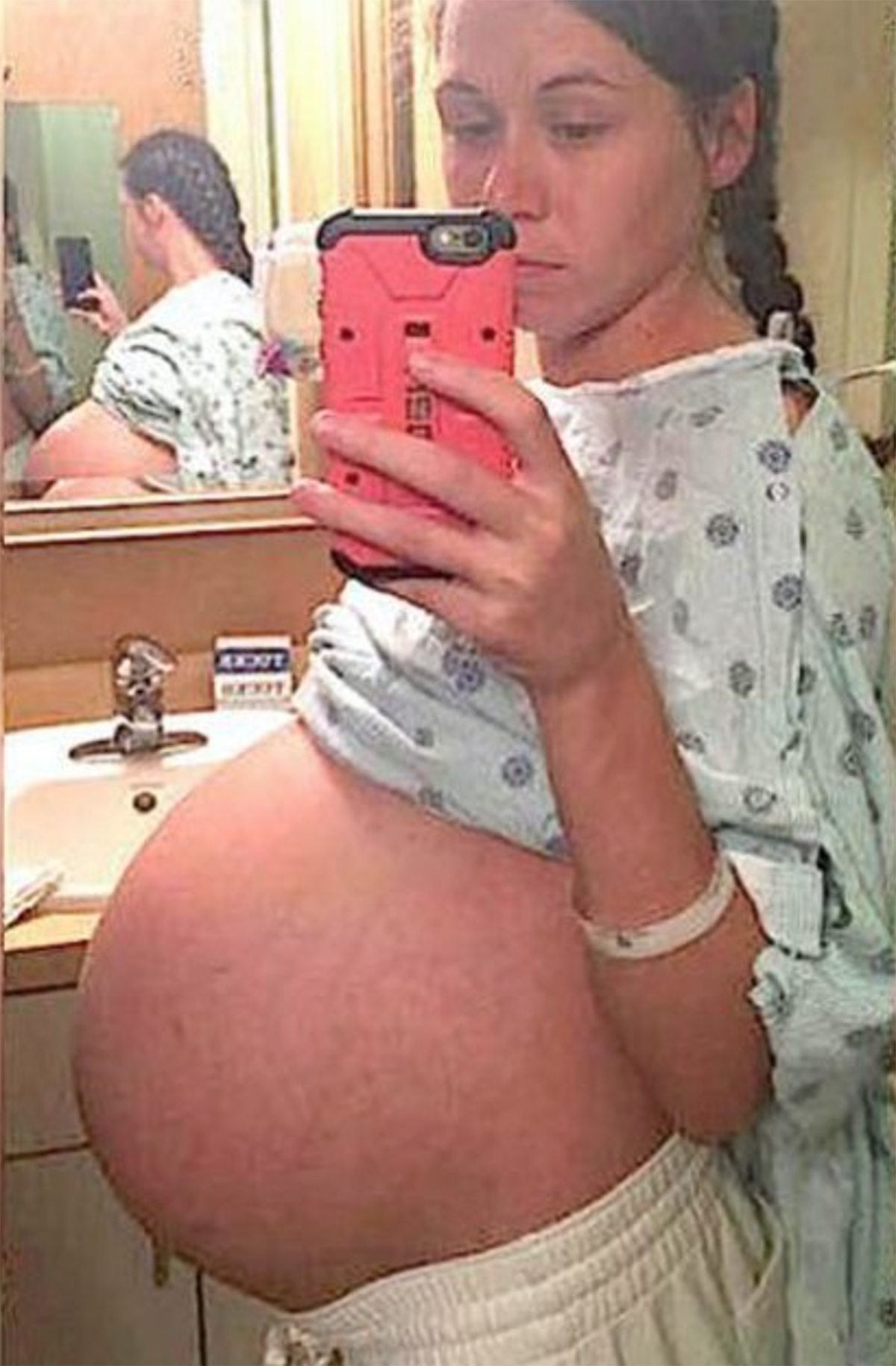 “It was the biggest shock of my life! We haven’t got any triplets in the family so it came completely out of the blue.” Since Becki-Jo had no family history of triplets, she was forced to figure out this strange pregnancy mostly by herself.

She and her loved ones gathered together and prepared for these three tiny babies to enter into the family! 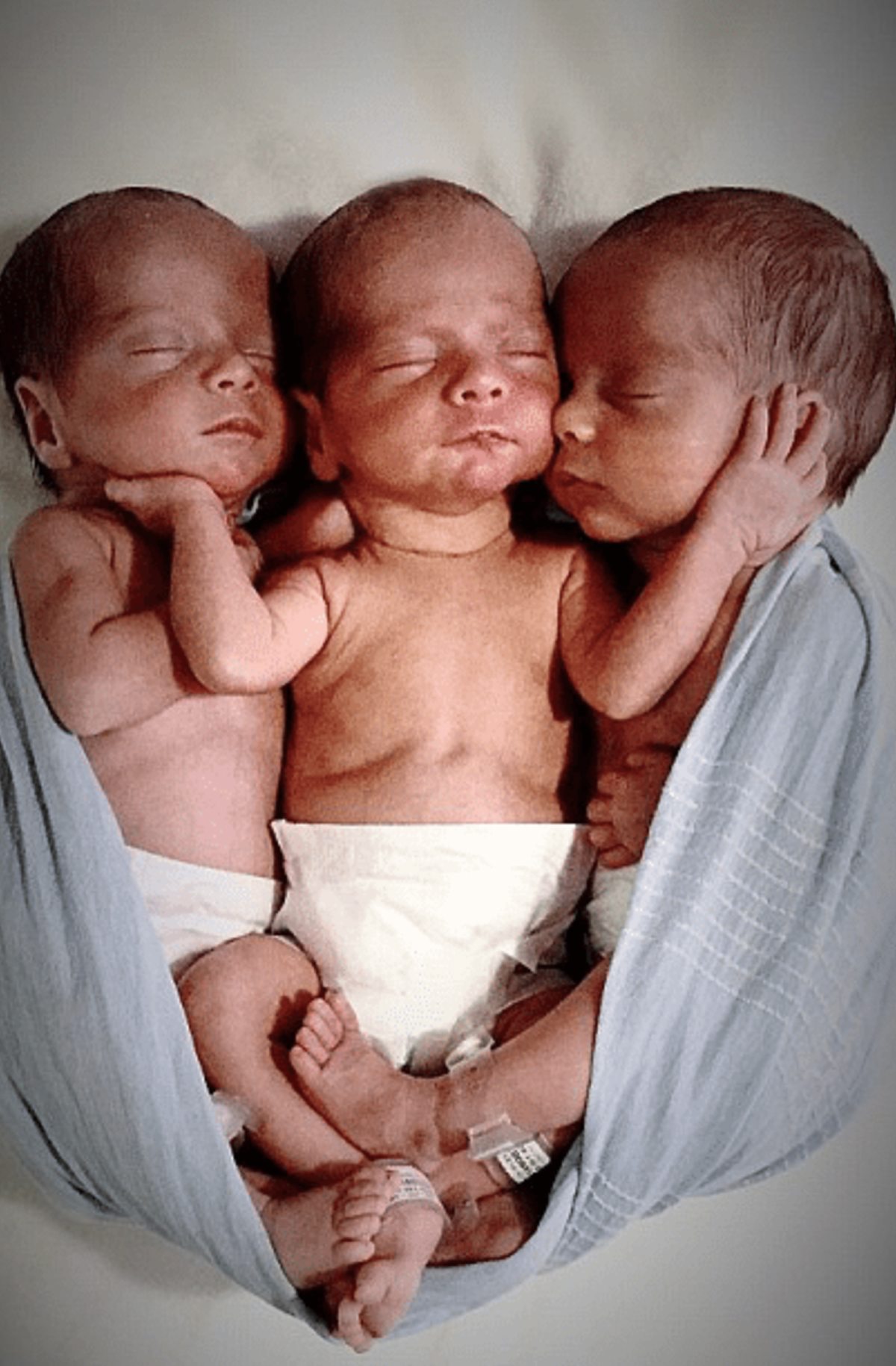 31 weeks into her pregnancy, Becki-Jo was rushed to the hospital and it was time for her to give birth! However, things became scary after her three boys, Rocco, Roman, and Rohan arrived. Becki-Jo said that the boys were not healthy at all when they were first born. 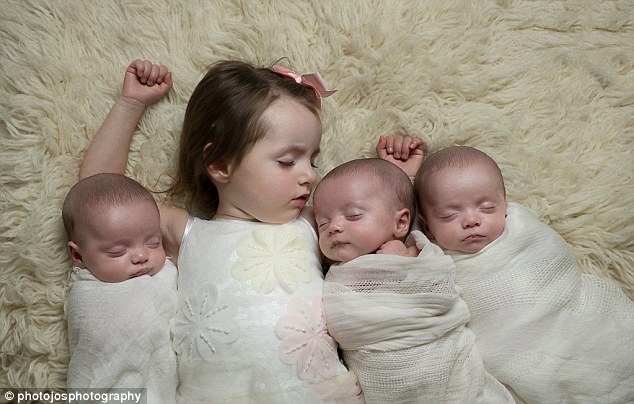 The three little babies were immediately rushed over to the Neonatal Intensive Care Unit (NICU). They were cared for there for three long, hard weeks before they were allowed to go back home with their anxious mother. Once their breathing tubes, chords, and wires were removed, Becki-Jo was finally able to get a good look at her precious boys’ faces.

It was at this moment when she noticed something strange: all of the boys looked identical to one another! 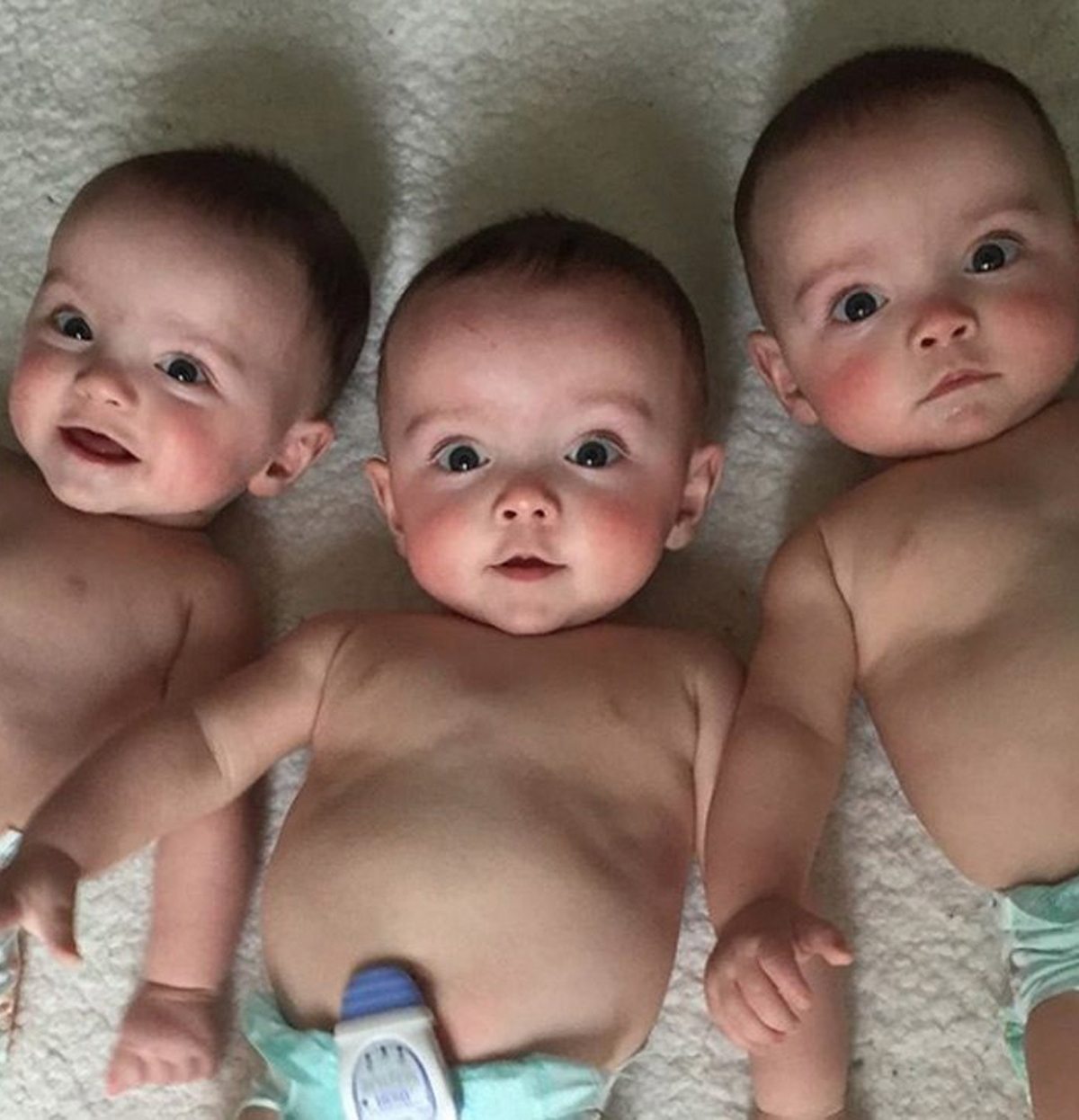 The chances of giving birth to identical triplets range anywhere from 1 in 60,000 to one in 200 million. In fact, these boys are the youngest of what is thought to be only a handful of naturally conceived sets of identical triplets in the UK. Becki-Jo was so skeptical that her boys were truly identical triplets, so she took swaps of her boys’ DNA and sent it off to a lab to confirm if they were.

Surely enough, the results came back positive, Becki-Jo was indeed the mother of a set of rare identical triplets! “I was surprised because I expected them to be non-identical,” Becki-Jo said. “But then I’m normally the only one who can tell them apart, so that does explain a lot!” 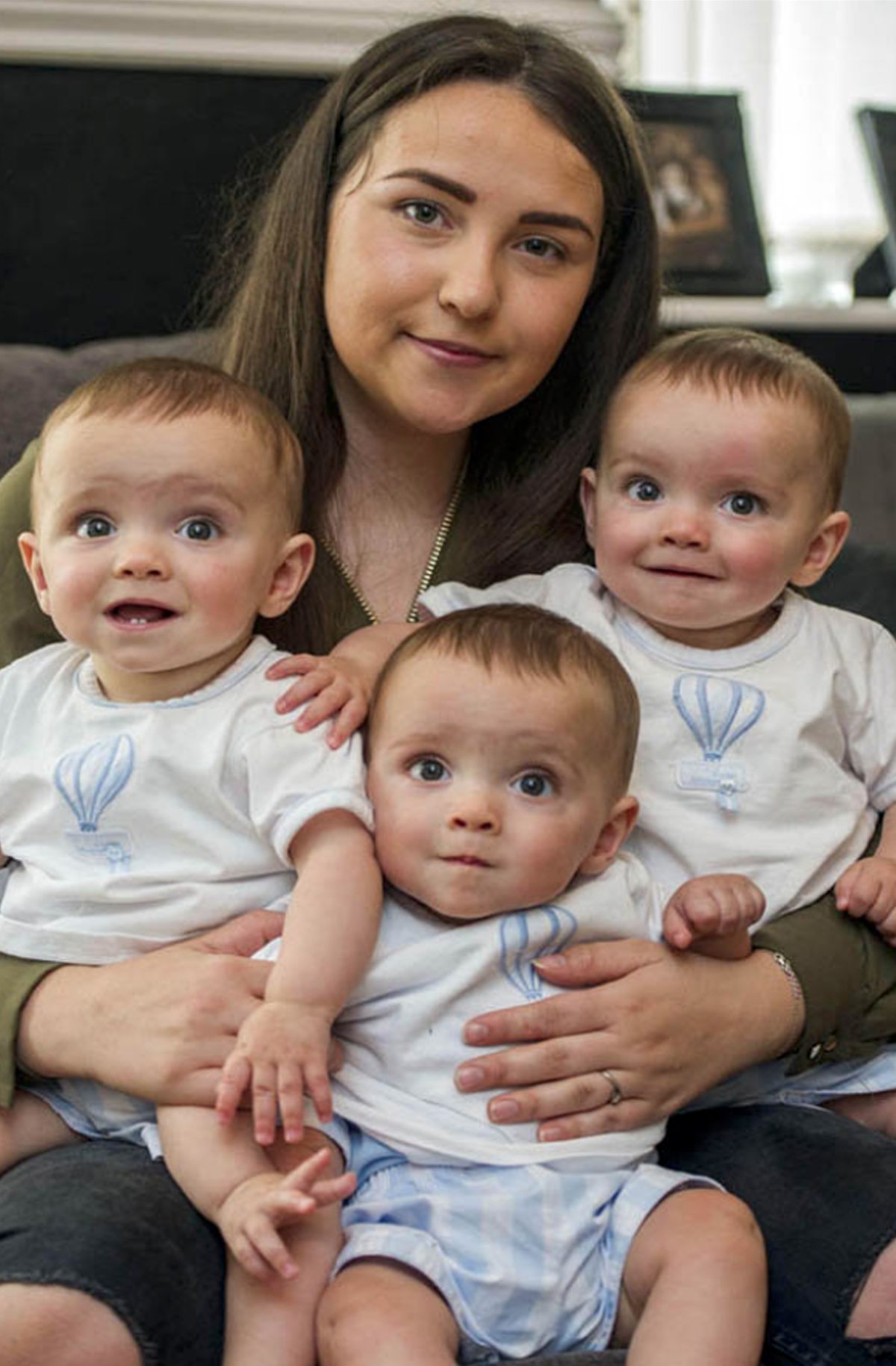 “I was always convinced they weren’t because that’s what I had been told during my pregnancy,” Becki-Jo said.

“I got in touch with a company who sent me some swabs and within three days of me sending them back, they told me the boys were identical… We don’t get anywhere fast because people are always stopping us when we’re out and asking if they are identical.” 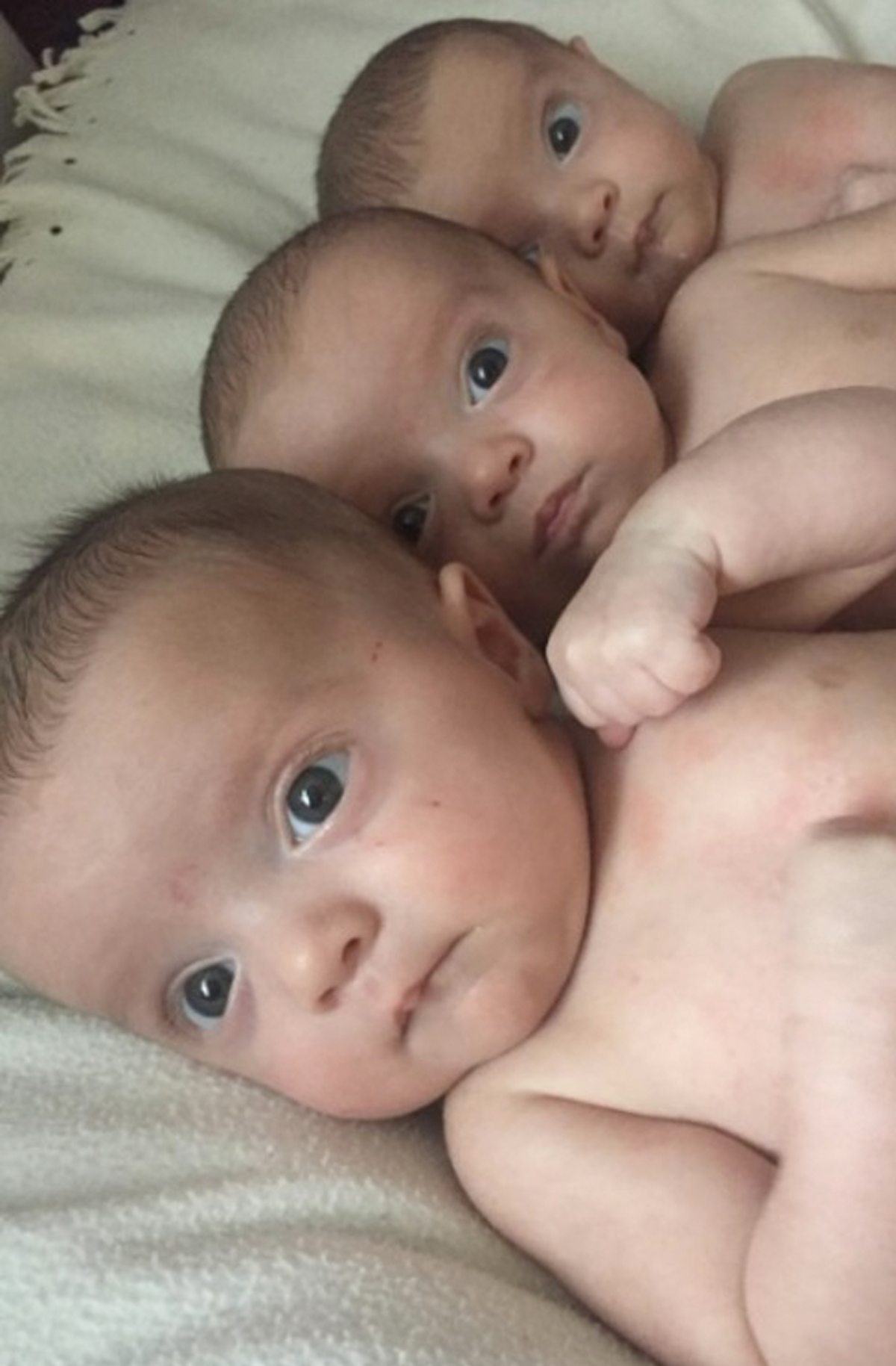 But even though they are identical, Becki-Jo is still able to tell her little ones apart quite easily. “Rohan is the loud one, he’s always shouting,” Becki-Jo said. “Rocco is normally quite laid-back, but he can be feisty too, while Roman is usually complaining that he doesn’t want to share.

They’re always crawling about after the same toy, trying to get to it before their brothers do. Indiana loves them, she’s not one bit jealous – I do feel a bit sorry for her when I think what it’s going to be like growing up with three little brothers though!” 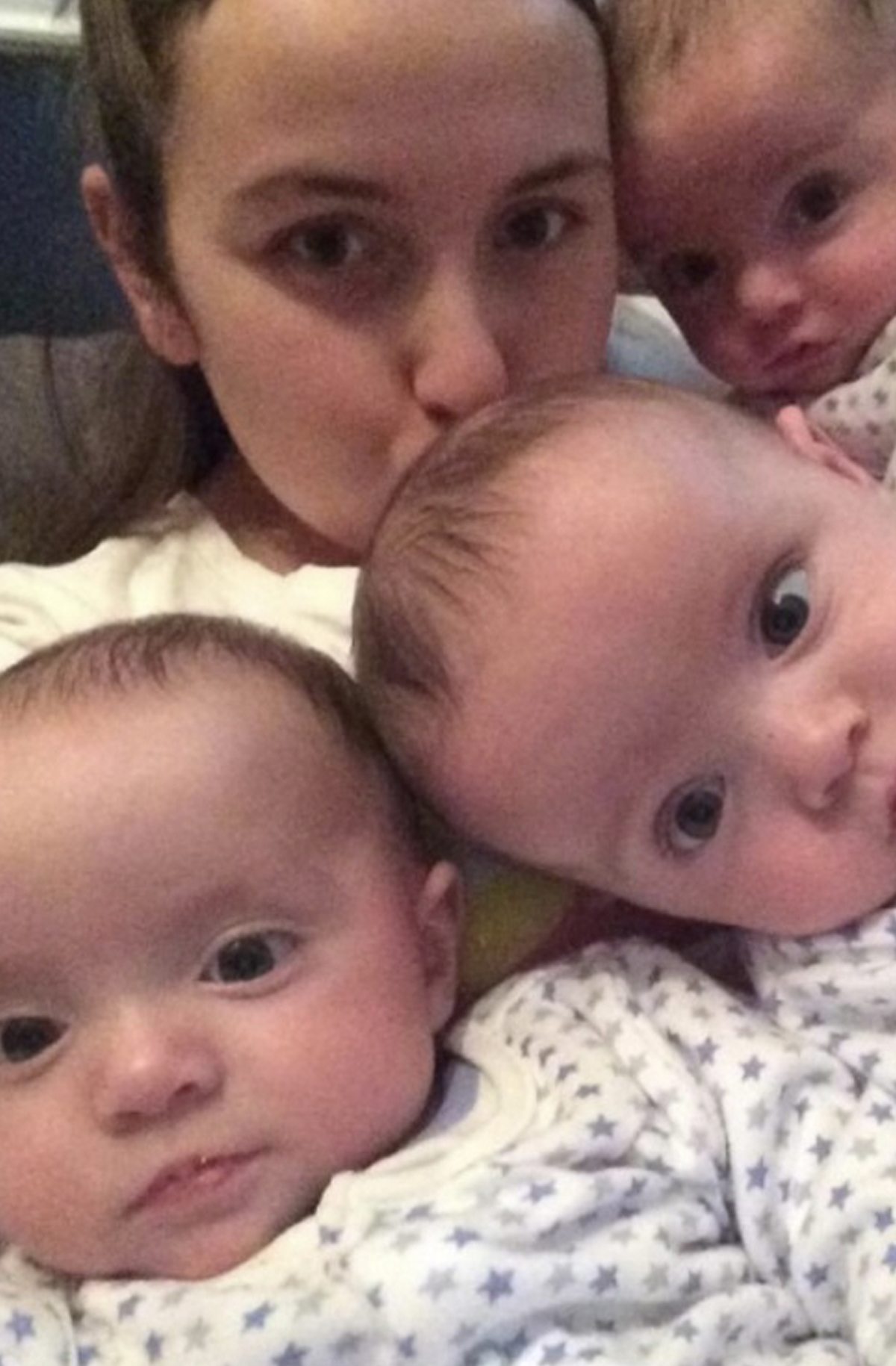 Taking care of all these children is no easy task, especially because Becki-Jo already has Indiana. But, the young mother works hard and has a wonderful 17-year-old sister, Lauren, who comes over to help Becki-Jo almost every day. 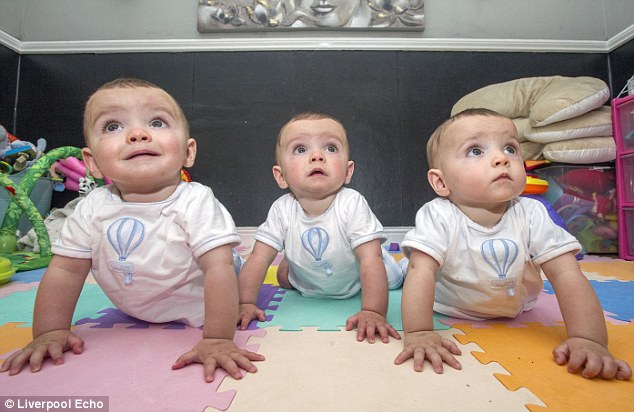 The sweet triplets go through around 130 diapers a week between them and four packs of baby wipes. A pack of formula lasts about two days in their house and the washing machine is run about three times a day! Before having Indiana, Becki-Jo’s hope was to train as a neo-natal nurse. Although she has to put her education and career on hold for the time being, she is even more excited to pursue this passion after having her triplets. 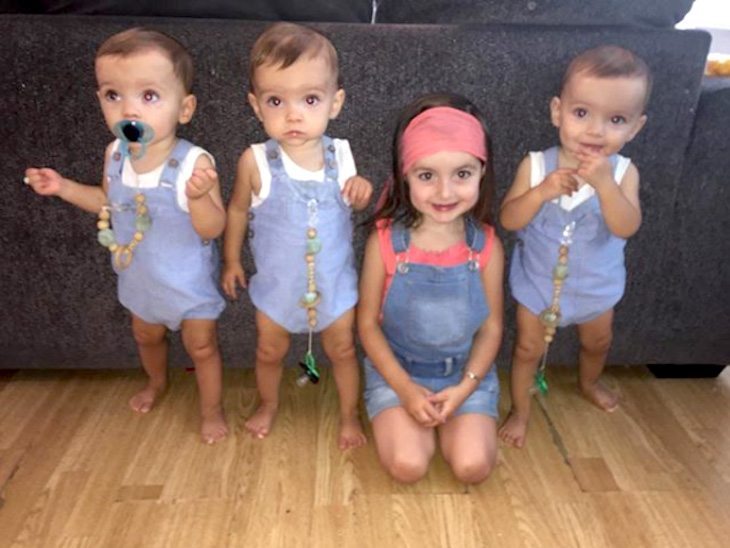 “All the help and medical attention we’ve received has been wonderful,” Becki-Jo added. “I’m just so happy they’re all doing so well now.” So, what are the chances of having identical triplets? Well, identical triplets are conceived when the fertilized egg splits twice, which is a very rare occurrence. 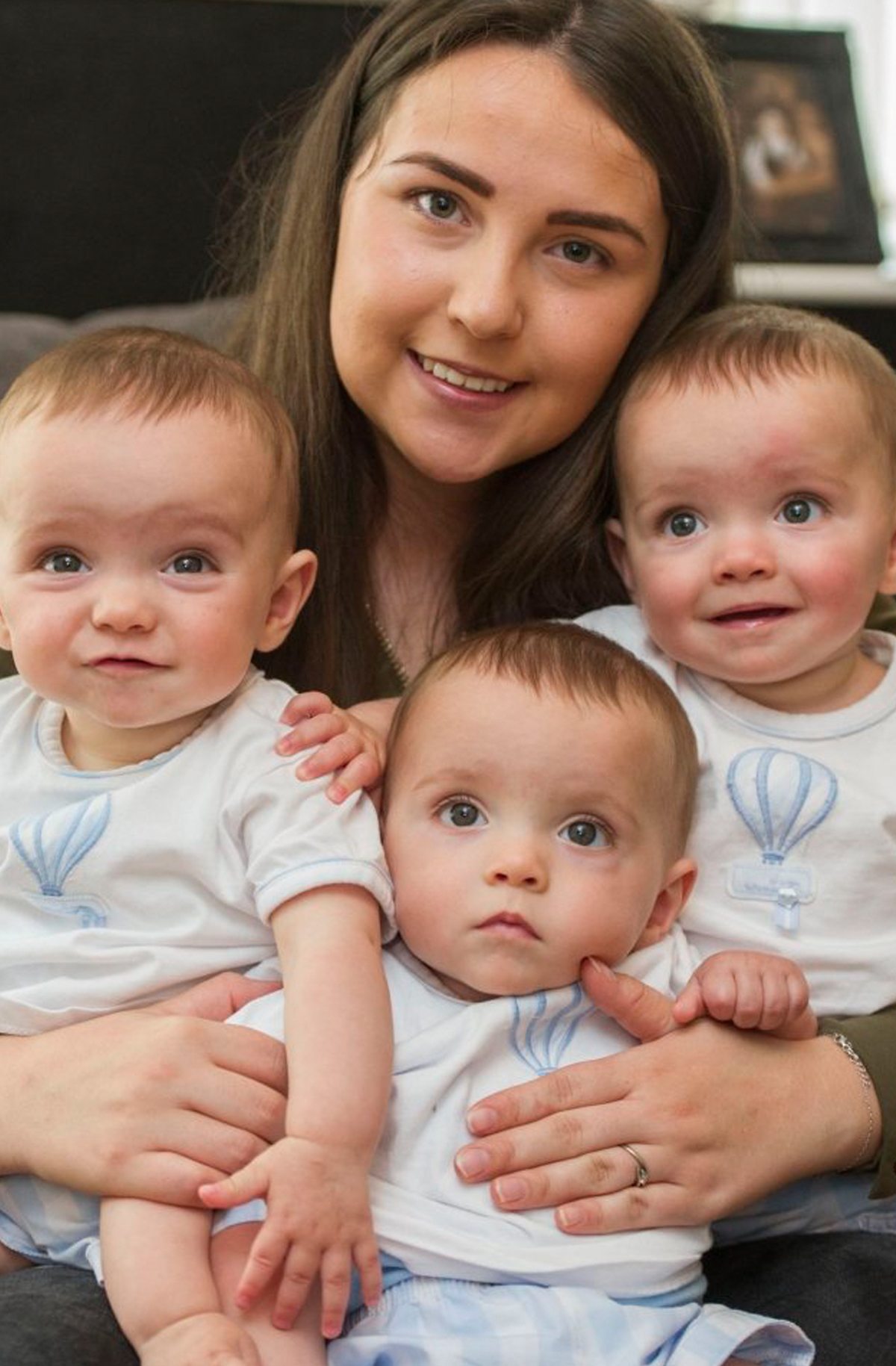 In fact, the odds against this occurring without fertility treatment have been put at between one in 60,000 and one in 200 million! If twins or triplets shared one membrane in the womb, they must be identical (monozygotic). 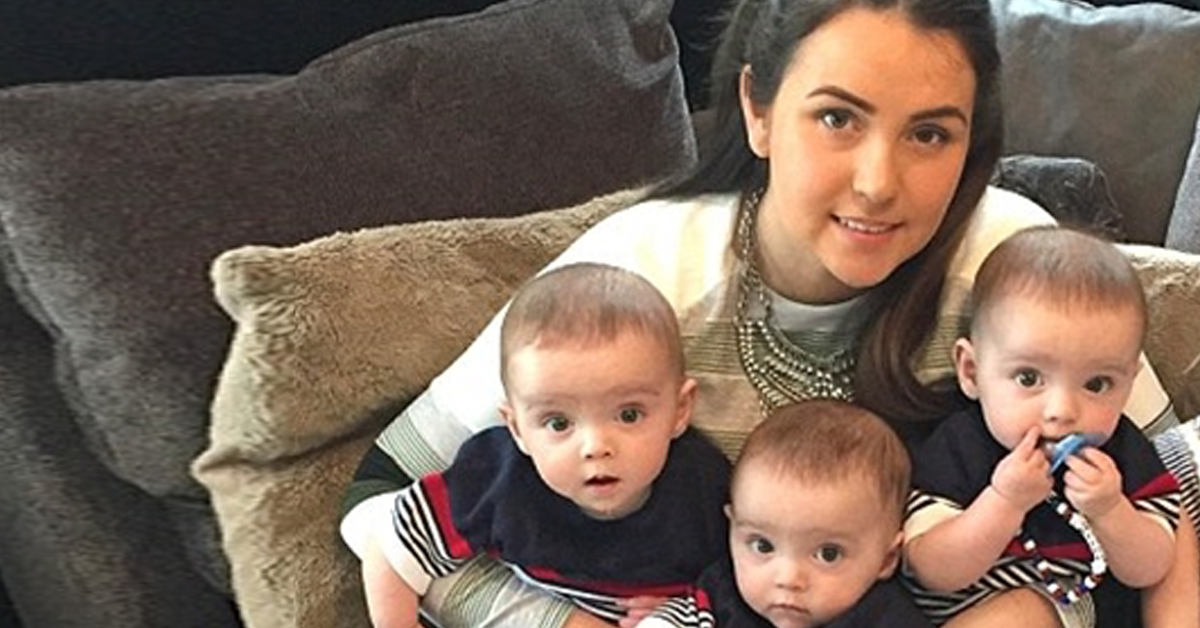 If not, the placentas are indistinguishable from those of non-identical (dizygotic) siblings, and only DNA testing can confirm that they are identical for sure.

These three little babies are not just miraculous, but they are also just so darn adorable! 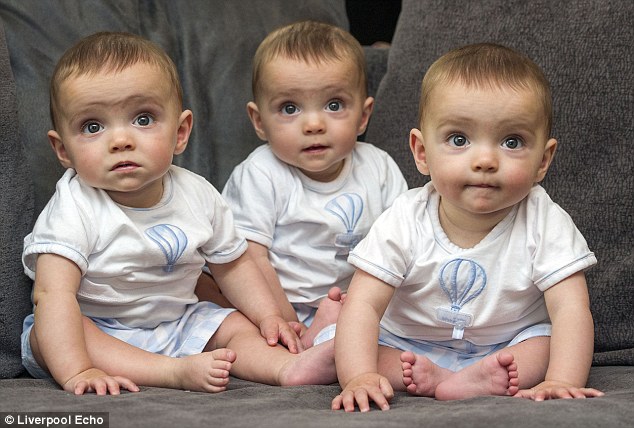 Raising triplets is no easy task, but we know that God will provide for Becki-Jo as she raises all four of her children. We already know that this family is so special and the odds of these triplets being born shows that God wants them here and that he wants to use them in an incredible way! Stay strong, Becki-Jo, and hold on to your little babies because they are precious gifts from the Lord!

We are praying for these boys as well as their sister as they grow up. May God bless Becki-Jo and her incredible family! We know God will be their provider, their healer, their comforter, and their source of strength. 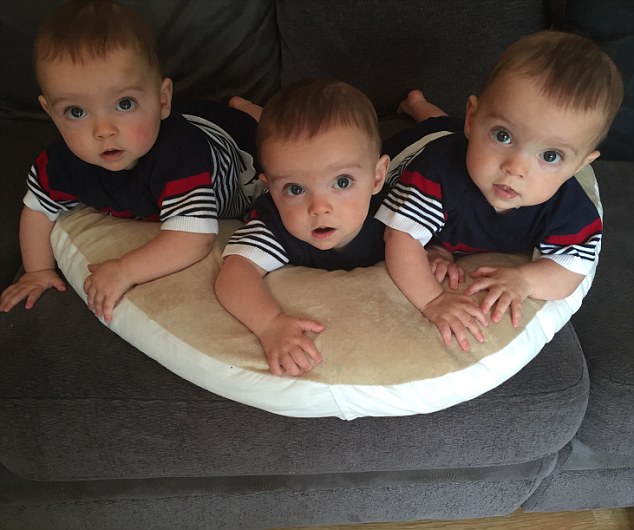 What a sweet little family! Share this story to amaze your friends with these identical triplets! 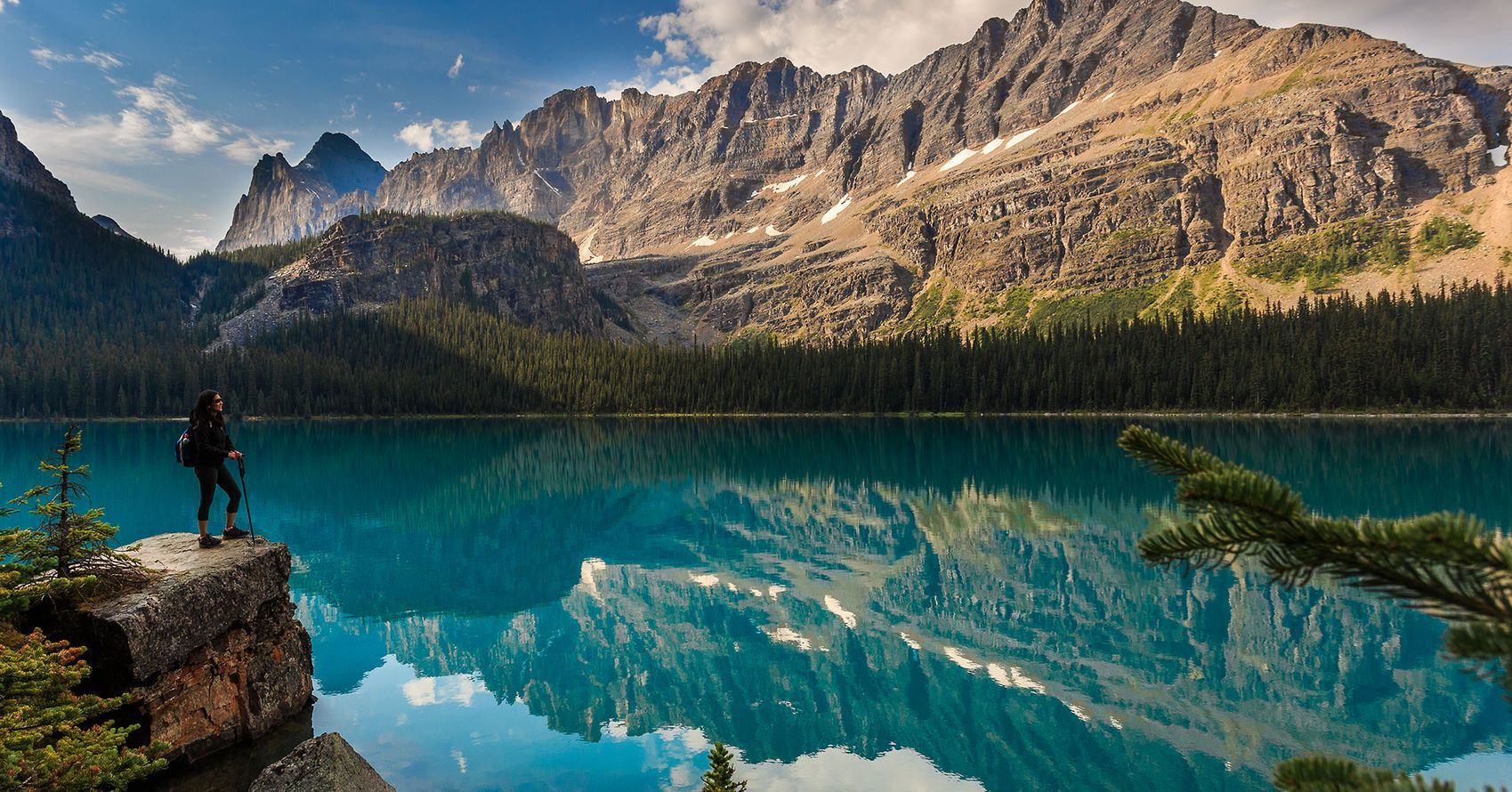 O Lord my God, you are very great; you are clothed with splendor and majesty. Psalm 104:1

His Fingerprints: As summer draws to a close, it’s tempting to think that nature has peaked and revealed its most beautiful season. But then autumn begins and we realize that the dazzling display of color, beauty, and amazing transformations only continues. The leaves begin to blur and fade into new colors, from green to tan, gold, scarlet, orange, and brown.

The sky takes on a richer shade of blue. The air becomes crisp and soon the first frost leaves a diamond-etched layer of ice coating everything outside. God’s beauty is always before us. Regardless of the season, his fingerprints leave indelible images for us to enjoy and to use as visual reminders of his glory, creativity, and power. We can revel in the sensual delights of autumn and use them as reminders to give thanks and praise for the wonders of the Creator’s handiwork. Pray: “Lord, I give you thanks and praise for this new season of autumn. I’m so grateful for the many blessings and abundant life you give to me today.”