We make plans, but it is God who decides what transpires and what doesn’t because He has a plan for all of us which is greater than our individual plans for own lives. We do not know how long our lives on this earth will be. At any moment, something could happen that puts our lives in danger. In all this uncertainty, it is our faith in God that gives us hope and strength to live our best lives. One thing that can really throw life off course is when we suddenly fall ill. When there is no known illness affecting us, we go about our lives hoping that, God willing, we will live for years to come. Sometimes, however, life takes a scary turn and we find ourselves hanging on to the smallest rays of hope for life. One young father in Washington got the shock of his life when he found his little son suddenly collapsed and unconscious.

Brion and Stephanie Lentell live in Port Orchard, Washington with their 4-year old son, Michael. Everything had been fine with little Michael until one afternoon on November 26, 2017, he seemed unusually lethargic. Normally an energetic boy, that afternoon he climbed into his father’s arms and slept heavily until early evening. Later, at around 8 p.m., Brion sent Michael upstairs while he stayed in the kitchen to make coffee. As he made his coffee, he listened for the sounds of Michael pitter-pattering on the floor above him, but the sounds did not come. This worried the father, so he went to check what had happened that had stopped his son in his tracks or distracted him. To his horror, he found his son collapsed at the top of the stairs, unconscious and barely breathing. Brion tried to wake his son up, but the boy did not respond. He then frantically woke his wife up and called 911. Stephanie, Michael’s mom, saw that her unconscious son was only taking in small amounts of air every 10 to 15 seconds, so she began to give him CPR.

Thankfully, the paramedics arrived and took over for Stephanie. The first responders continued CPR to revive Michael and even gave him a shot of epinephrine to start-up his heart, but he still had no pulse. Finally, a shock from an external defibrillator managed to restore his heartbeat, albeit an irregular one, but it was enough to stabilize his condition for the time being. He was rushed to the hospital where doctors discovered that Michael has a cardiac abnormality called Long QT Syndrome, a condition that causes erratic heartbeats, known as arrhythmia, due to a delay by milliseconds in the heart’s ability to return to a resting state. Milliseconds sound insignificant, but it is enough to trigger seizures or cause unconsciousness. The heart could also beat erratically for so long that it may cause sudden death. Doctors were able to put an automatic implantable cardioverter-defibrillator in Michael’s abdomen which will help regulate his heartbeat and prevent potentially fatal arrhythmia. If it weren’t for Stephanie’s knowledge of CPR and the effectiveness of the first responders, Michael may not have made it. 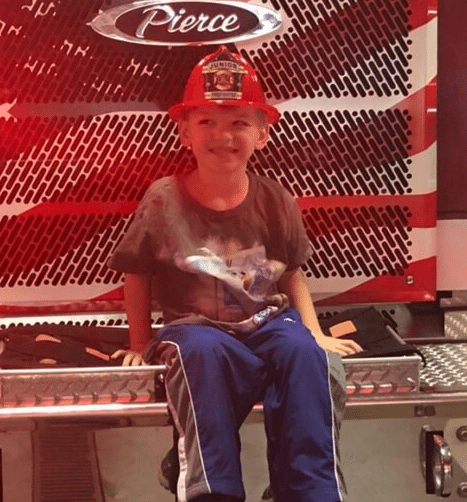 Share this story and thank God that little Michael was able to be saved!